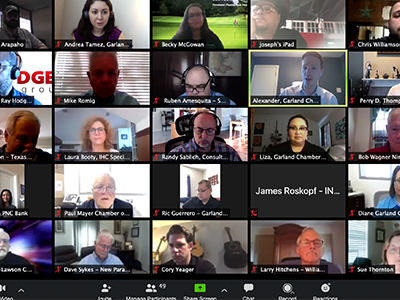 The Garland Chamber in partnership with Texas Security Bank is proud to be hosting the BOLD Speaker Series 2.0. The Business Speaker Series will be a monthly, continuing education forum for business owners. The series is designed to enhance knowledge in critical business disciplines - especially for the independent business owner.

Thomas Sullivan, Vice President of Small Business Policy at the U.S. Chamber of Commerce, will discuss some challenges small businesses are facing in a slowing economy.

Previously, Sullivan was an attorney in the government relations practice of Nelson Mullins Riley & Scarborough, LLP, a law firm with a major East Coast presence from Tallahassee to Boston. Before rejoining Nelson Mullins, he served as general counsel for the Bipartisan Policy Center, a nonprofit organization founded in 2007 by former Senate Majority Leaders Howard Baker, Tom Daschle, Bob Dole, and George Mitchell.

Sullivan served under President George W. Bush as the highest-ranking government official charged with exclusively advocating the views and needs of small business before government agencies and Congress. As chief counsel for advocacy at the U.S. Small Business Administration, he was directly involved in more than 100 regulatory and legislative matters, testified frequently before congressional committees, and was a spokesman on economic conditions and entrepreneurship. The hallmark of his tenure at SBA was a national legislative initiative guaranteeing that small business has a voice in state regulatory decisions.

Upon leaving government, Sullivan was named to the National Federation of Independent Business Small Business Legal Center Advisory Board, and he serves on the board of directors of the Global Entrepreneurship Network, a platform of programs and initiatives aimed at creating an entrepreneurial ecosystem.

Sullivan earned his Juris Doctor from Suffolk University Law School in 1993 and a Bachelor of Arts in English in 1989 from Boston College. He lives in Virginia with his wife and two sons. Frost provides a full range of banking, investments and insurance services to businesses and individuals in the Austin, Corpus Christi, Dallas, Fort Worth, Houston, Permian Basin, Rio Grande Valley and San Antonio regions. Founded in 1868, Frost has helped Texans with their financial needs during three centuries.